Call boxing, tell them he coming

If you hadn’t done what you did, I wouldn’t be

The Gymshark USA Headquarters is an absolute vibe.

Productive first day in our USA HQ with our Americ

From Behind the Flash: The Stockholm Diary

My eyes snapped open, and swam into focus as the aircraft angled downwards. To my immediate right was a plain woman, noticeably forlorn-looking and seemingly hunting for answers through the tiny window. To my left, Noel, swiping through old pictures on his phone in an apparently unsuccessful bid to cure flight-time boredom. Across the aisle a father and son gawked through the window on their side, black silhouettes from where I sat. The sunset burned a deep orange scar across the sky, cut short only by a crisp, cloudy horizon, pin-pricked with city lights. 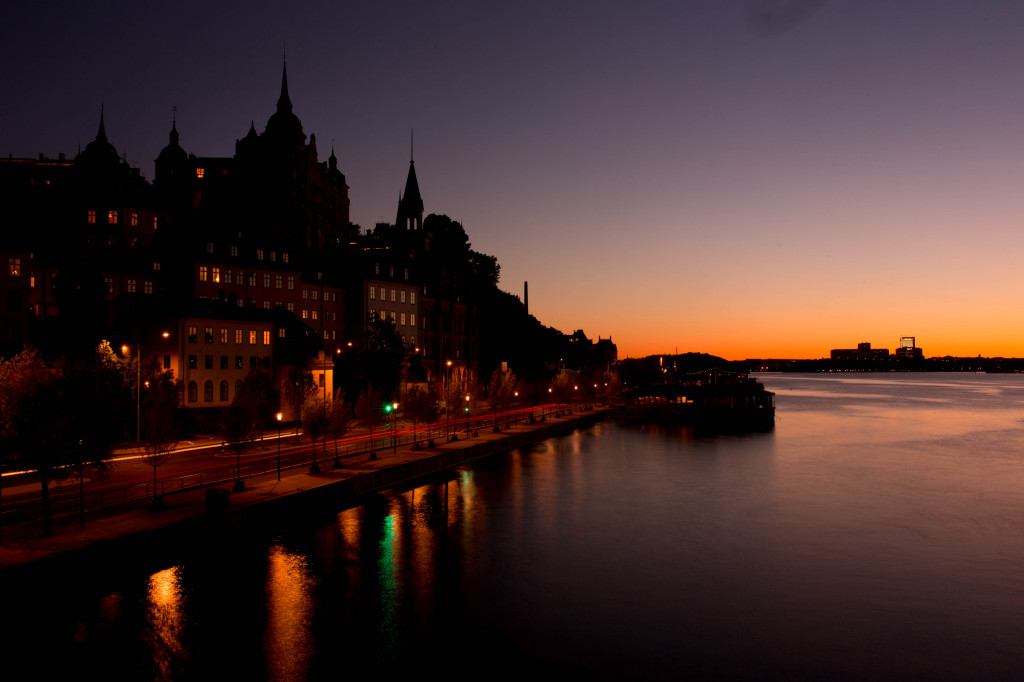 Noel’s here to shoot Josefine Forsberg and Alex Shirpey; an Instagram-famous couple both sporting some of the most impressive physiques I’ve ever seen (and teeth, tan, hair, eyebrows… Pretty depressing stuff, to be honest). The client: Gymshark. The brief: sports editorial shots showcasing one-off samples of the new women’s range (so if we lose any of them, we’re fucked). The kit: a Canon 5D MkIII for photography, Sony A7S for videography, the Sigma Art Series Lenses, an Elinchrom Quadra superkit with a large softbox, a large suitcase for transporting the flashes and clothes and a Beetle 282 backpack for the cameras and lenses. 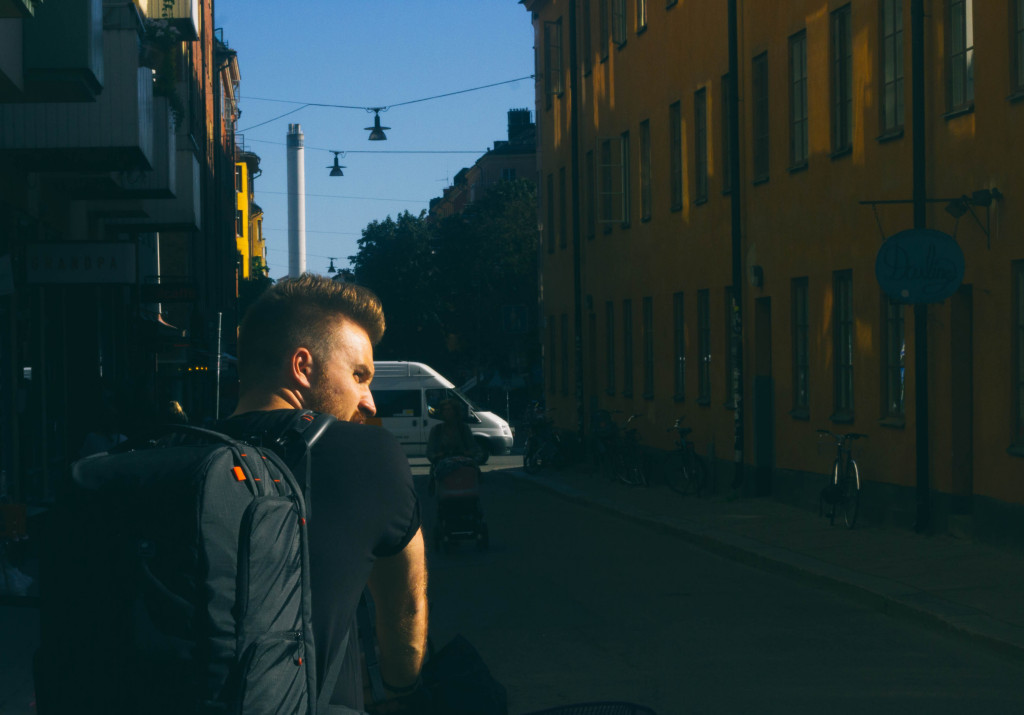 I’m here to help out; having taken the summer between Law degree and Law School off, I’ve got ample time to put my 10,000 hours into photography. The first time I picked up a camera was last winter; we were going to Dublin, and I wanted to be able to get some nice snaps for myself. But since then, I’ve not really stopped snapping. So I come along to most of Noel’s shoots, whether it’s simply to watch or to play flash-holder, stylist, HMUA and sometimes a location scout. Following the Stockholm shoot we figured we should put together a blog on Noel’s travels, should I come along; I’m writing it as I still have the amateur’s perspective, whereas it’s Noel’s everyday (and because I have to proofread all his caveman blogs anyway).

Being around Noel in this environment is frankly inspiring. He’s respected and sought-after on a huge scale in this industry, and I’m genuinely privileged to be able to work with him on such crazy briefs as Gymshark’s. For anyone that doesn’t know, Gymshark has a phenomenal story of its own that’s well worth checking out, but for relevant purposes is a sportswear brand from the UK.

The fact that Noel and I have essentially been let loose in Stockholm with a couple of models and a suitcase full of equipment is testament to how much confidence they’ve placed in Noel’s abilities; he’s not only guaranteed to get a look book full of killer shots, but his directorial (is that the right word?) skills are bang-on too. As many of you may know, keeping the momentum going during a shoot is SO painful. It’s surprisingly exhausting – you’re essentially stood around for 6, 7, 8 hours on end, often with no time to pause for food, switching locations, hunting for makeshift changing rooms, coping with on-the-move HMU touch-ups and perhaps even a language barrier. Trust me when I say this: photography is NOT glamourous, even if the end results are! More often than not, it means very early mornings, days spent chasing the money shot, and evenings of editing details that, frankly, would go unnoticed to the untrained eye. 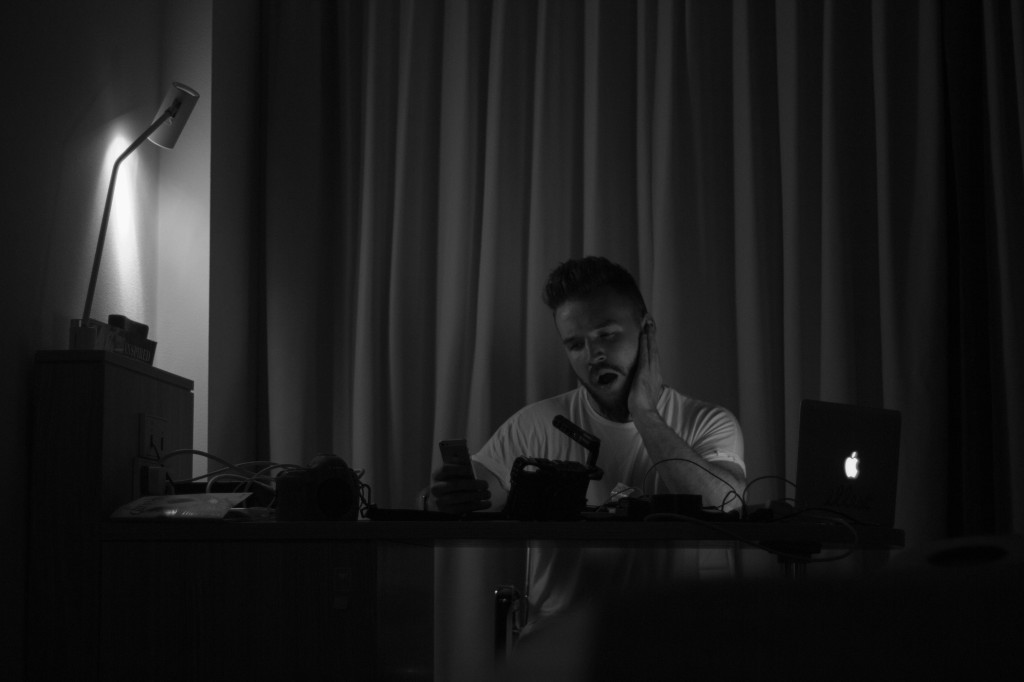 Thankfully, Josefine and Alex are pretty perfect models, making our job a lot more pleasant. That doesn’t just mean they’ve got abs of steel; a good model is cooperative, patient and doesn’t need constant direction from the photographer. I think that’s a common misconception – that the photographer should be telling the model to change poses every 30 seconds – and it can be more than a little frustrating. J and A asked us before each scene where their eyes needed to be looking, knew their markers, had fucking amazing pouts and made sure each muscle was properly tensed, switching up positions every so often.

We also had a properly considered brief, which is another extremely important point; even if you’re on a small shoot with one model and two outfit changes, the least you can do is put together a Pinterest board to show to the client beforehand. It’s vital that you’re on the same page before the shutter clicks – the last thing you want is to be handing over images that were nothing like the client imagined. Stay true to that brief throughout the shoot as though it were gospel. Noel’s written a post on the subject, and provided a free brief template, here, but in short a brief needs to pinpoint the look (clothes, HMU), the locations, the photography style, the mood, and perhaps some deliverables (i.e. how many final pictures the client is expecting to see).

As we’d already shot a Gymshark editorial in London a few weeks earlier, we knew we needed dramatic, active images that showcased the clothes in an accurate setting. By that I mean recognisable yet realistic surroundings; for example, a jog on Westminster Bridge, or crunches on the lawn in front of Stockholm’s city hall. The balance needs to be struck between places a fitness fanatic would genuinely work out, and getting in shots of the cities we’re sent to for those iconic, billboard-worthy images. 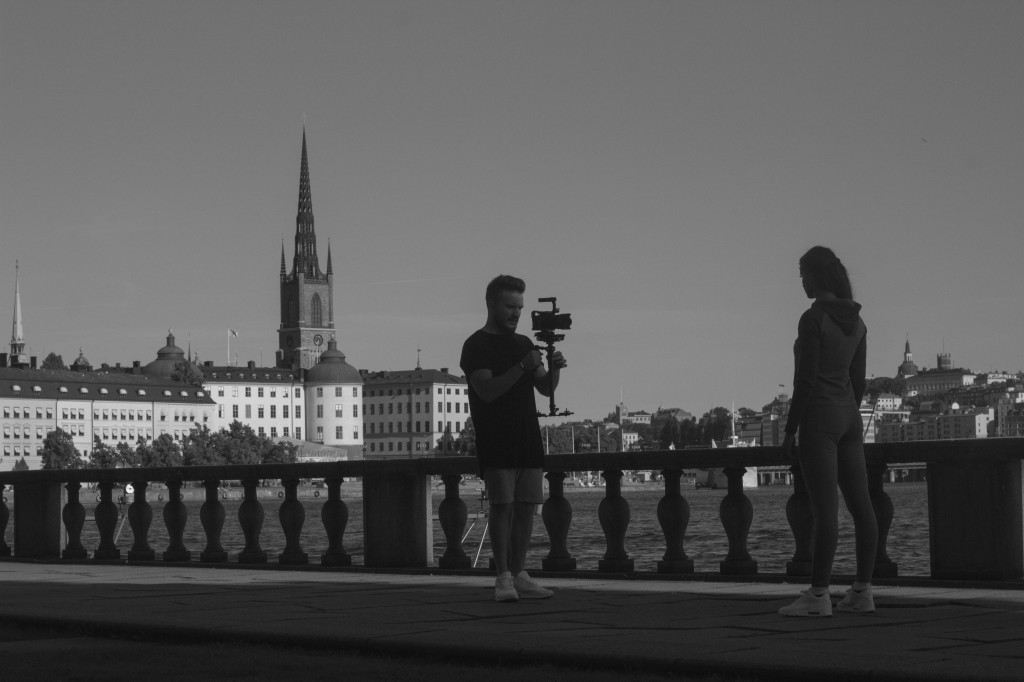 Featuring the clothes properly is my job, or at least that of the lighting (hence From Behind the Flash): getting your lighting right is often the difference between a mediocre photo and an eye-wateringly amazing photo. The Elinchrom kit we used is small, portable and, with 2-3 battery packs, will get you through a full day of shooting more or less constantly. Both of us are completely of the opinion that the lighting is the most important element of any picture, and is what makes the image personal to the photographer; with that in mind, we’re going to put together a more comprehensive piece focussing only on lighting in the future.

We had two locations in accordance with the brief: the City Hall, which offered a great view over the water and beautiful, national romantic-style architecture, and a well-equipped muay thai gym owned by a friend of J and A. Whilst it is important to scout locations prior to shooting, don’t fall into the trap of shooting in overly-used locations – a great light and a great eye can create a winning image, no matter the location. For example – we found a stripped-back, grungy wall in the gym that ended up providing the perfect backdrop for some portrait-style images. 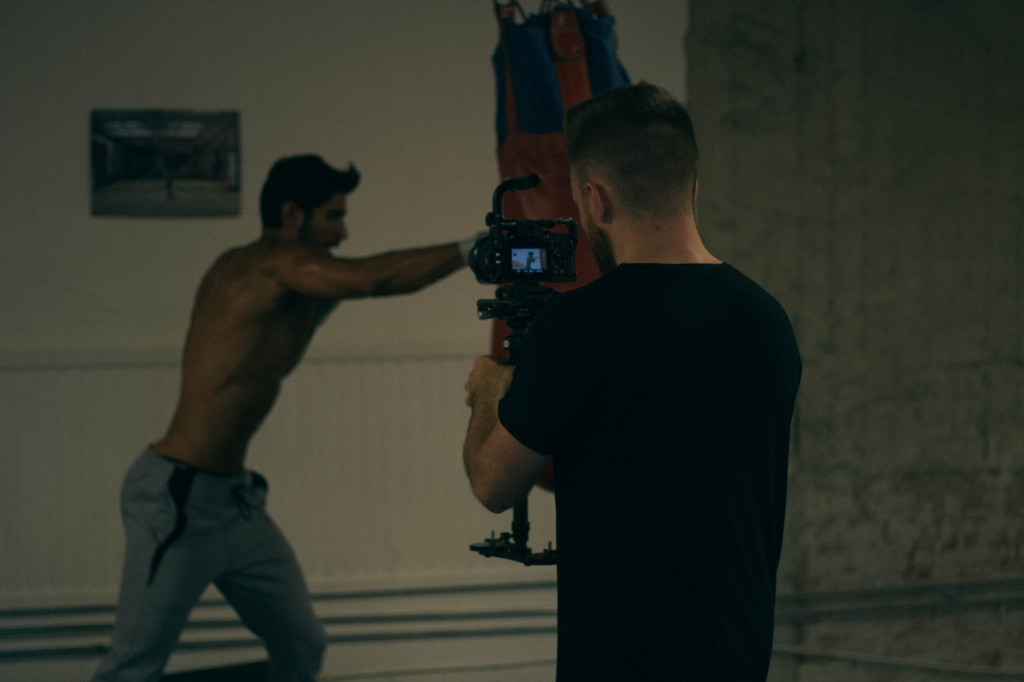 For want of not writing an entire dissertation, I’ll let the pictures do the rest of the talking. That said, the trip to Stockholm impressed one thing in particular on me: that if you’re starting out as a photographer, or are just about to organise your first studio shoot, don’t be scared of making a mistake. Scrolling through Noel’s pictures back at the hotel, there were plenty of over-exposed, blurred or completely black shots. He also needs to concentrate on the bigger picture – excuse the pun – which means he often fails to notice certain things; rubbish on the floor, for example, or creases in garments that need straightening out. Things like that are very, very annoying when it comes to editing the shots in post, and can sap so much of your time.

Now there were obviously far fewer of those dud images on Noel’s camera than there are on mine after a shoot, but the point is that you’re never expected to point the lens at the model and get the perfect lighting and composition the first time you click the shutter. Provided your models are patient, feel free to play around with the lighting and angles (if you’re on location) – and most importantly, don’t be afraid to say that you hate a shot if you think it’s really not working. That’s why photoshoots take hours and hours on end! Going out on shoots with Noel has helped me build confidence; I now know that even the Maestro slips up sometimes. 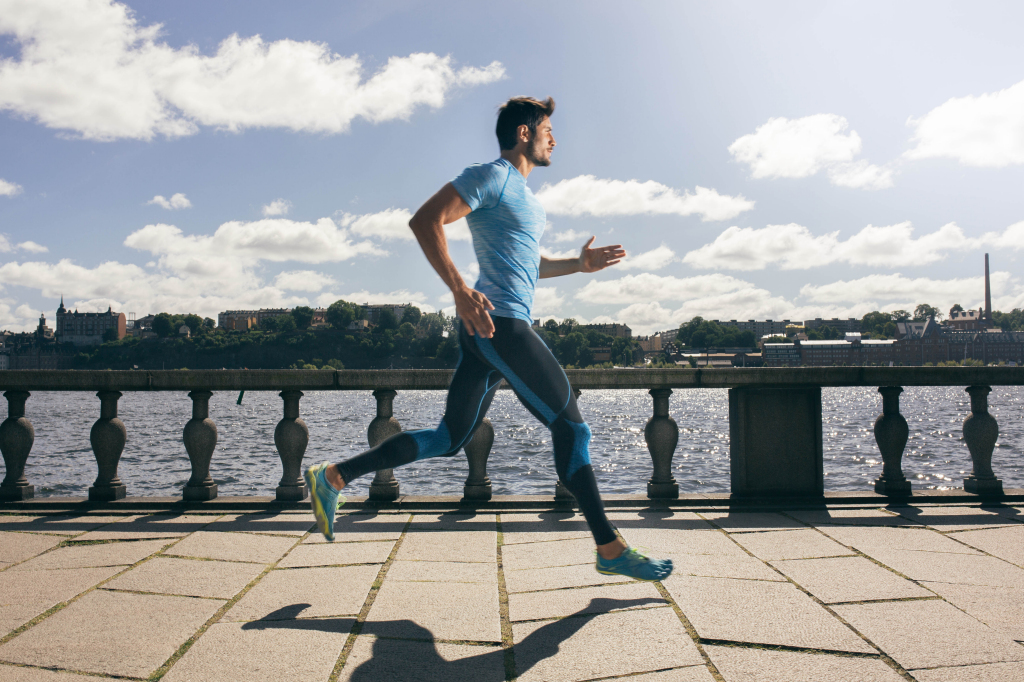 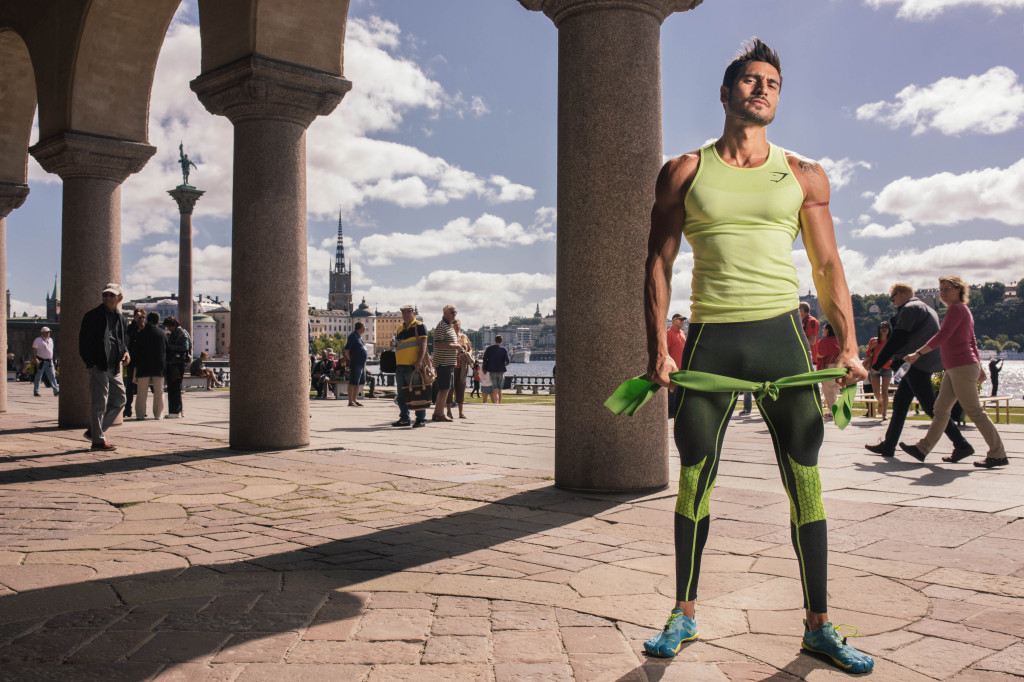 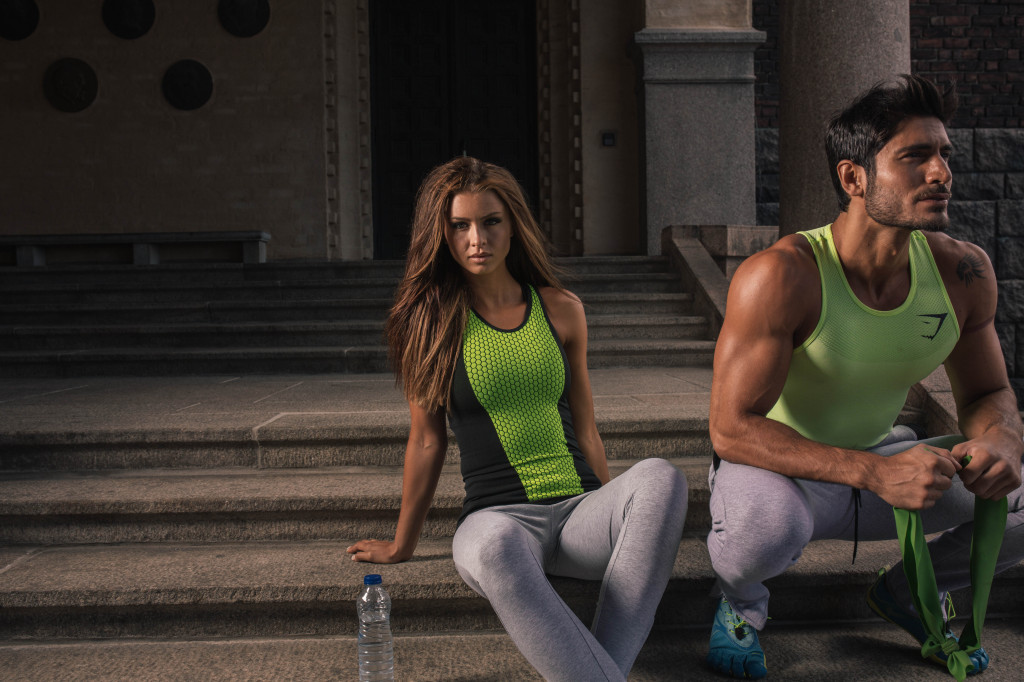 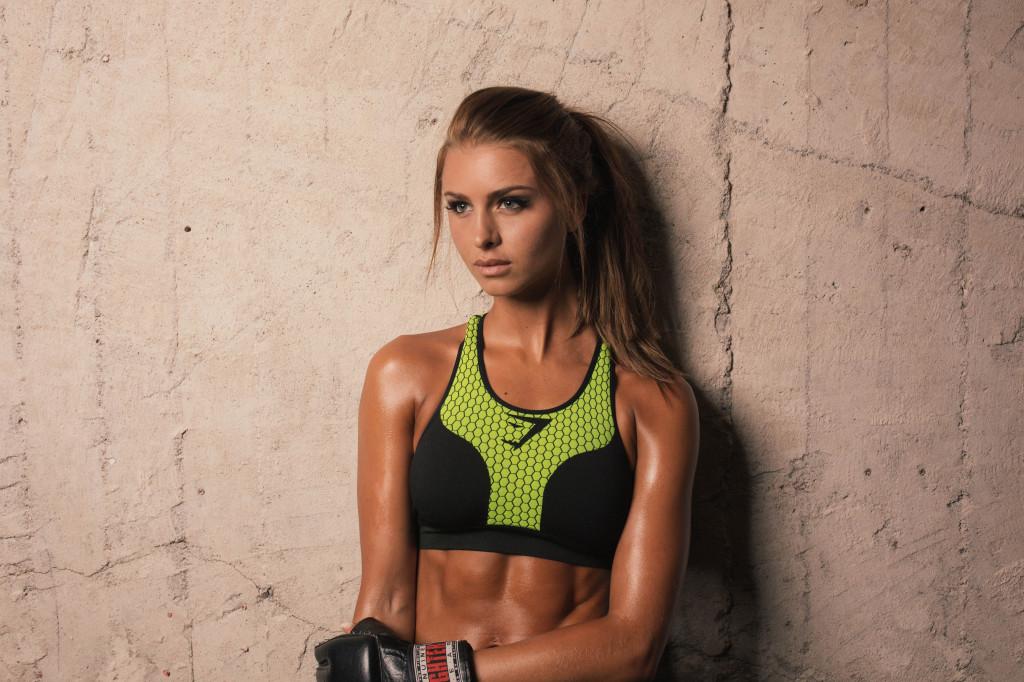